"This site contains affiliate links to products. We may receive a commission for purchases made through these links."

Onan began as a single company, but in 1986, Cummins Engine Company purchased them, making them a fully owned subsidiary of this brand. Cummins is well-known for its power technology, including Onan generators. While performing the research for this Onan generator review, we discovered that Cummins and their best Onan generator options fall into several categories:

It was in 1920 when David Onan started the company. Initially, the company’s focus was vehicle electrical systems. Eventually, Onan started working on designing and manufacturing Onan generators. The first generator that he created was able to provide power for up to 10 35-watt lights. This generator used a Briggs and Stratton engine.

In 1927, he gave this generator to a friend so that he could try it at his lake cottage. However, the friend said that the lights flickered a lot when using the generator. Onan determined what the problem was and eventually discovered a design that would eliminate it. This resulted in the birth of the Onan Ten-Lite Generator.

For the most part, this generator was a hit among people in rural areas since during this time period, grid electricity was not available in these areas. At first, sales for this generator were slow. Eventually he adapted the technology further and started working with other people and companies to further what he could create. When he along with Master Motors created a 500-watt generator, a new market opened for him. This generator was an AC generator that was portable and powered by gasoline.

With the new 500-watt generator, people not only could get lights working, but they could also use their AC radios that were popular during the time period. Onan continued to strike deals with other companies to further his technology and find new ways to sell his generators, such as via catalogs with the help of catalog giant Montgomery Ward.

A Look at Cummins

While working on this Onan generator review, we took a good look at Cummins since they now own Onan. This company began in Columbus, Indiana in 1919. The founder was Clessie Lyle Cummins who was helped by William G. Irwin, a banker who offered him financial backing for the company.

The company focused on engines and building them based on Rudolf Diesel, a German engineer’s, groundbreaking technology. By the 1960s, this company had established a presence and reputation in 98 countries throughout the world. The company continues to expand and look for new ways to design their engines, generators and related components to be better and more efficient.

In the US in 2018, the company reported a net income of $2.19 billion. This includes the sales of Onan generators.

To find the best Onan generator type, the first step is to look at the options that are available. They have numerous generators in several categories.

This company offers a variety of home standby, portable and RV generators. The home standby generators are manufactured to have the wattage needed to keep your entire home in power during a natural disaster or other incidence where you lose grid electricity. You will find numerous wattage ranges so that you can find one that is capable of handling the wattage needs of your home.

The RV generators have the outlets and technology needed to be compatible with an RV. This company’s portable generators are ideal for activities, such as camping. You can also use them at home when you need to provide power to a few smaller items, such as a fan, laptop or lamp when the electricity goes out.

They offer generators that are enough to power everything from a small business, to a data center to large buildings, such as a hospital. These not only offer very high wattage ranges, but they are designed to withstand long-term use. This ensures that you can keep your business in power no matter what is happening outside. There are several options, including those that turn on automatically so that you are only without electricity for a few seconds.

Between Onan and Cummins, they have over 80 years of experience in designing and manufacturing marine generators. These units are used all over the world for a variety of recreational, government and commercial marine applications. The devices are designed to provide power for ships for both emergency power and general service power. All of the components are created to last when used in a marine environment so that moisture does not cause premature damage.

Onan and Cummins are constantly looking for new ways to enhance the technology that powers their generators. There are several features that you can take advantage of when you have a generator from this company.

These enclosures are built to not only protect the inner components of your generator, but also to make sure that it operates as quietly as possible. It is also common for this brand of generators to have a muffler to make them run even quieter. With this feature, there is also a thru-flow cooling system. This ensures that your generator’s engine does not overheat even when you are running it for long periods of time.

Some of the smaller generators allow you to start them by simply pushing a button. All you have to do is check the fuel and oil levels before starting them to make sure that the levels are adequate. Then, just push the button and your generator is ready for use.

Several of their generators come with this feature. There are two parts of the microprocessor control technology. The first is digital voltage regulation. Due to this feature, you never have to worry about voltage spikes causing damage to your generator or anything that you have connected to it. Secondly, there are self-diagnostic capabilities. With this, if your generator has an issue, you can use this feature to troubleshoot so that it is easy to discover the issue and get it repaired.

You will not have to physically access your generator to get it running due to the remote starting. Many of the smaller RV and portable generators created by this brand offer this feature. When your generator has it, simply push a button on the remote the engage the engine.

The Following Are Among the Best Onan Generators 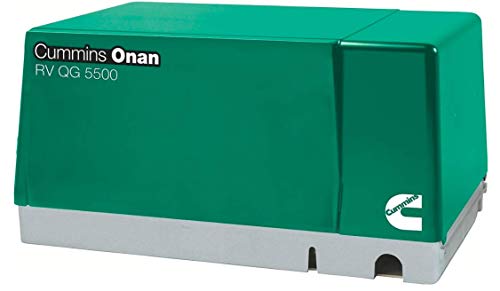 The Cummins Onan 1119 LP Generator has 5,500 rated watts. You use liquid propane to fuel it, making it an efficient unit that is a good choice for several home and recreational applications. Its v-twin, four-cycle engine is considered very fuel efficient and among the quietest in its class. This generator has a decibel rating of just 67 decibels.

The device has is microprocessor controlled, allowing you to use it safely. This is due to the prevention of voltage spikes as a result of its digital voltage regulator. With this feature, you can also troubleshoot any problems with your generator easily because it has self-diagnostic capabilities.

This generator’s muffler is USDA approved with the Forest Service as a type of spark-arrestor muffler. The enclosure is sound-attenuating and it features a type of thru-flow cooling system. All of these features help to keep the engine cool while also reduce the noise output when you are operating this device. 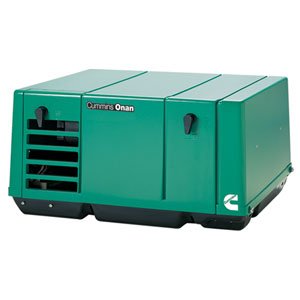 The Onan RV Gasoline Generator is among the quietest generators for its size and design. This is due to multiple elements, such as its sound deadening material that makes up the enclosure and the intake silencer. It provides 4,000 watts but operates at just 68 decibels. Because of this, it is an ideal choice for camping, RVs and similar outdoor activities.

You get excellent fuel efficiency from this generator due to its four-cycle engine. The wiring is protected due to the generator’s fused DC circuits and magnetic circuit breaker. It is easy to track the health of this unit because it provides set diagnostics. Use the control panel to fully operate and monitor the generator at any time.

The power that you get from this generator is enough to run an air conditioning that is 15,000 BTUs. You can also operate several smaller items at the same time, depending on your needs.

At 25 percent load, this generator runs for approximately 16 hours on gasoline and eight hours on propane. The gas tank can hold up to 6.6 gallons at a time. Use the gauge to determine how much fuel is left. You can connect a 20-pound propane tank.

It has a remote start feature so that you can start this unit from inside. You can use this remote up to 109 feet away from the generator. It has a push button start, but there is also a pull cord backup.

During operation, the generator runs at 74 decibels, so it is quiet for its size. The engine functions at 13 horsepower, and it is a 420 cc, four-stroke engine.